New Delhi [India], October 5 (ANI/ATK): The Meme Coin market has gone from strength to strength despite the big dip in the market since the summer of this year.
What started off as a joke to many investors has now shown that the meme coin community is backing their respective platforms.
Dog-themed cryptos dominate the top meme coins, but a new meme coin called
shows signs that the market will have to make way for a cat-themed revolution.
Big Eyes Coin has already raised over 3.53 million dollars during its presale, and as it enters stage 3 of its presale, the new meme coin does not seem to be slowing down anytime soon. Many analysts predict it could overtake leaders like FlokiInu (FLOKI) and Shiba Inu (SHIB) when it launches.
What is so special about Big Eyes Coin (BIG)?
Big Eyes Coin (BIG) is a DeFi community-based meme coin with many benefits and features to entice users to the platform. The creators behind the new crypto seek to make its users "awww fortune" while also giving money to charities that look after the ocean to protect the fish.
80% of the 200,000,000,000 tokens will be available at launch. Also, Big Eyes Coin (BIG) will be launched on one of the biggest exchanges, Uniswap, so it is not a surprise that the new crypto is predicted to explode once it launches. Another exciting feature that Big Eyes Coin will have will be allowing users to buy NFTs and become a part of the cool NFT Sushi Crew. 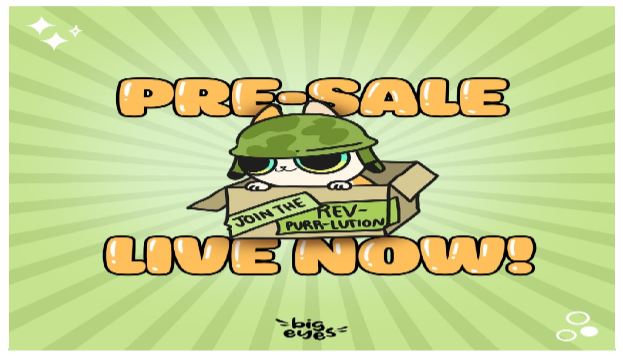 Big Eyes Coin (BIG) will have a lot of fun merchandise that can be bought on the platform, so cat lovers are definitely in for a treat. Also, the fact that according to the platforms whitepaper, there will be no fees or taxes when it comes to shopping on the platform.
Shiba Inu - Top Dog Meme Coin
Shiba Inu (SHIB) is dubbed the Dogecoin Killer, as it is becoming just as popular as Dogecoin and has made millions for its holders. Shiba Inu's value started to rise when big personalities like VitalikButerin and Elon Musk started tweeting about the charming dog meme coin.
Another reason why Shiba Inu (SHIB) is still on top is its need to be more available worldwide, which helps it to dominate the meme coin community. Crypto has gained a lot of interest from other exchanges, like Mexico's most popular cryptocurrency, Bitso, which will start trading on its exchange. Also, an Indian cryptocurrency exchange, Giottus, declared they would follow suit. So this could be a great time to join the platform while the bear market is on and purchase the token at a bargain price before it catapults.
FlokiInu's (FLOKI) Key Factors
FlokiInu burst onto the meme coin market in the summer of 2021. It is still a new crypto, but it has succeeded in impacting the crypto market. Floki Inu (FLOKI) stands out from other meme coins because it combines utility with memes. Also, it relies heavily on gaming in the Metaverse, which helps more users join the profitable meme coin.
Also, as FlokiInu has more than 200,000 holders of FLOKI on BSC, Ethereum shows its staying power. The meme coin is only ranked at 2776 on CoinMarketCap, but don't let the low ranking put you off, as many crypto enthusiasts expect it to make a big comeback when the bull trend appears.
If you are looking for a new meme coin that is both charming and profitable, look no further than Big Eyes Coin. Its solid roadmap and charitable efforts should help it to become popular with potential users. It could rival Shiba Inu (SHIB) and Floki Inu when it launches. So watch out, a new cat is in town!
To find out more about Big Eyes Coin (BIG), visit the links below:
Presale:

This story has been provided by ATK. ANI will not be responsible in any way for the content in this article. (ANI/ATK)

Tunis [Tunisia], November 27: Tunisia and Libya have signed an agreement of a common working strategy for the year 2023 to develop trade relations between the two neighboring countries, the Tunis Afrique Presse (TAP) reported on Saturday.

Namibia to intensify fight against wildlife crime during festive season

Marathon kicks off in Libya's Tripoli